Not a Professional Solution

Started a topic Thu, 10 May, 2018 at 5:21 AM
It has been sometime since I have opened VS. I had secretly hoped that I would be pleasantly surprised when I next had occasion to use it. Surely some of the limitations of the older versions would be addressed in the current build, yes?

I cannot understand how a product which touts itself as "Pro" has no control over import size of images. Further, there is no control for frame size. Combined, it means that you cannot create video for anything other than 16:9 aspect. Even further, you cannot guarantee that the images you worked so hard on in AI will come in at size...in fact, they will come in at no predictable size whatsoever. Why? How could this ever be a desired feature? Why are there no precise size controls of any kind in VS? Why no pixel markings on the rulers?

Truthfully, I have been persuading clients not to do whiteboard, draw-on videos, and I have been using AE almost exclusively for my MoGraph work. As there is no easy or quick way to do draw-on effects in AE other than cumbersome mask work and endless tracing, I returned to VideoScribe for my current client, thinking I could coax it to do what I wanted. That, and I had just paid my yearly subscription...

It seems that I have been betting on the wrong horse. Truthfully, for the time and anguish it is going to take in trial-and-error to get VS to spit out something usable, I am going to have to go the mask-and-reveal route in AE, or export discrete elements in VS, ignore the "pop" that still plagues the drawing engine, and then lay in a hand in AE and animate it separately.

And I do think, that if these simple, basic problems are not addressed by the time my next renewal rolls around, I will be canceling my subscription with extreme prejudice.

It is a supreme shame that "pro" does even come close to meaning what it implies.

Thanks for your feedback.

We are always open for ideas and suggestions. We have not had much demand for the ability to have control over import size of images. Would you be able to explain what the benefit of this would be to you? What exactly are you trying to achieve that would require precise control over the size that image is imported at?

I have just done a quick test with 2 different SVGs (I've attached them here) that were both created with 1000x1000px artboards. So long as there are anchor points on each of the edges of the artboard space, the images come into VideoScribe at exactly the same size if the camera position is at 100% zoom, the VideoScribe application window is the same size and the image import quality setting is the same when both images are imported.

On Thu, 17 May, 2018 at 9:57 AM
I do most of my work in After Effects. As such, I must have compatibility between any other program that would use and AE. That means that I need predictable sizing, color, and line weight that is identical and precise.

Often I will augment an image "drawn" in VS with further animation in AE. This necessitates matching the original AI image over the VS output. So far, I have had to laboriously scale the imported AI images in AE to match the output of VS. Never, in the last two years of using the program, have they ever been at size.

I am currently working on animations for a client who has specified a frame size of 950x504px. My life would be much better if I could set a canvas size in VS, like I can in any other animation, video, drawing, painting or editing/compositing program on the planet. Instead, I must use the "transparent-round-corner-rectangle" hack to maintain any semblance of registration between images, and even then, I must carefully enlarge all at the same time to screen width. They come in as tiny versions in the center of the canvas in VS at 100% viewer magnification. Why are they not actually 100% size? Then when the resulting video is brought into AE, it is sometimes they are 50.5% larger than the desired frame size, sometimes 50%...or anywhere in between.

I cannot imagine if I had to maintain screen-safe or title-safe areas for my animations. It would not be possible.

And that is just the images.

The text engine in VS does not address numeric font size at all. Neither is kerning, line spacing or tracking handled the same way as AE or AI does. Further, there is no ability to change the intra-word letter spacing. Some of the spacing is too far apart, but I cannot adjust it. And if I want to further manipulate the text once I have brought the VS output into AE, I have to manually adjust the text of a new layer to match the sometimes-very-off result in VS. If VS had numeric font sizing, I could set the text in AE to the same point size, and go on to animating.

I often want to fill an outlined image, and make it look like it is being painted or drawn in. To do that in VS, I would have to have a separate layer with the stroked "fill," a cumbersome process to do in AI. So, I prefer to do this in AE. That means overlaying a precise AI image on top of the VS output, so I can mask in the fills with paint strokes. Again, this presumes that I can precisely match the vector files with their VS counterparts. As the SVGs are made from the AI originals, this should be a no-brainer...but again, as there is no numeric sizing of any kind in VS, this becomes a torturous endeavor. No two videos are ever exactly (to the pixel) the same. Dragging an image handle to scale an image will never be precise.

While we're at it, why is the UI so slow (especially going into image acquisition or font list), and why does even a 1-minute scribe tax the limits of my computer? I can render a hundred layers of composited, effected, and multi-minute footage in AE, and my computer never skips a beat.

There are other features that would make this program truly "professional," such as alpha channel for transparent background. Sometimes you just want the hand moving around,so you can composite it in another program. You might want the entire scribe composited over moving footage. Using the green background for greenscreen will work after a fashion, but it is needlessly cumbersome, and I will resist doing it again if I can.

What about an undo? Forget multiple levels, even one might do. I am told that some things can be "undone." Some? Really? Lottery as software?Maybe it will, maybe it won't? I see people complaining about this as far back as 2014!

And finally, we are still talking about the pixel pop problem of virtually any user-created SVG, years after it was first noticed. Many, many workarounds have been proffered by your users, and still nothing eradicates it. I remember Flaah having this problem years ago - Macromedia and then Adobe did nothing to fix it. It's a sub-pixel addressing issue, if I am not mistaken. As it appears your program is built on the Flash rendering engine, it is not surprising that it is still plaguing us. I would appreciate it, however, if someone at Sparkol would just admit that nothing can be done about it, there is no universal fix, and that we must just live with it. Again, not a professional solution, but at least an honest one.

I suppose I could look at your program as a "plugin" of sorts for my animation workflow, rather than a stand-alone solution. But these issues are becoming quite tiresome the longer they continue. I am loathe to commit to drawing everything twice (the only option if I use paint layers to do image reveal in AE), and then attach a motion path for the hand to follow for every image I want to magically draw onto the screen. But I am being forced to it.

At $144/year, I expect more from a "professional" program.

Thank you for your response. I hope I have answered your questions. I look forward to learning how Sparkol intends to fix these issues.

Thanks Mark, I have passed your suggestions onto our development team and they will be considered for inclusion in a future release of VideoScribe.

Just to pick up on one of your points on pixel pop Mark,

I review the Community Exchange images here before they are put into the Library for sale and it's a common flaw we find with new illustrators. We are working on a 'Definitive guide for illustrators' that will highlight all the technical things we do to ensure our images are the best they can be. We have almost finished our 'in house' version which includes our styles and colour palettes and then we are going to strip out all the style/design bits and make the technical parts publically available to everyone.

However there are 3 bits of advice I give all Community Exchange contributors if their images 'pop' too much when they finish.

- Save settings are crucial, match the below 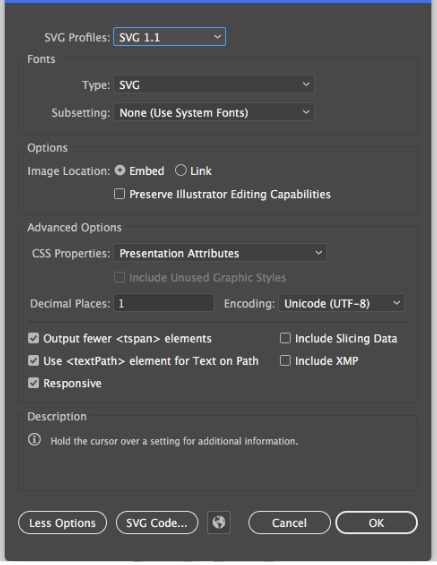 You are correct, this will not remove 100% of the problem on 100% of images but it will on the majority of images and ensure it is dramatically reduced and less/barely noticeable on the remainder.