blending / dissolving instead of just appearing in an instant

I had hoped that I could make an object appear in a softer mode instead of just having it pop into view. I tried around with transition time and suchlike, but the only thing I managed was to increase the pause between the last object being drawn and the new object appearing (in an instant)

It's a test I did today for a series I want to do. At the end, I have the logo and a draft-info popping up in a rather disruptive way. As I said, I am only managing to increase the pause between the actions.

In Keynote I would use the mode "dissolve" and assign a number of seconds to that action. I was hoping to find something similar in Videoscribe. Is there a workaround?

You could use the move-in feature for those elements and they will move onto the screen from the side.

You wouldn't be able to have both the logo and draft-info moving in at the same time unless you combined them into a single image. 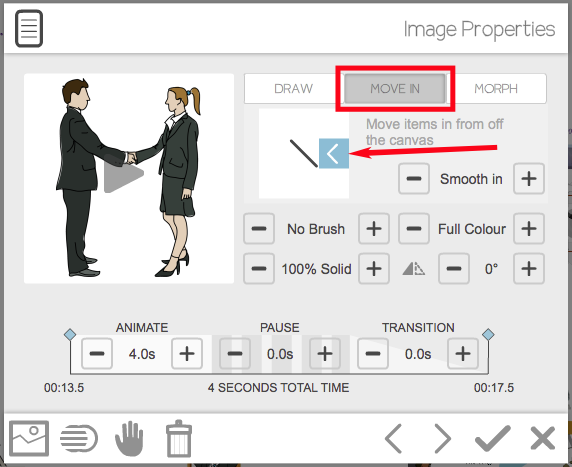