The Problem with Beta Testing

I see Sparkol is looking for Beta Testers. I would love to Beta test but one problem. You can only have one version of VideoScribe on your computer at a time.

This really needs to change. Why? Daily I'm working on client's gigs. I can't be slowed down. Ideally I would want to install a stable version of VideScribe and the Beta Version on my computer.

To be honest, being able to install 2 versions of VideoScribe even when not used for Beta Testing would be helpful. I think the advantages would be obvious.

Understand I'm not talking about running two versions at the same time but being able to install two versions on the same computer but you can only run one version at a time be it the stable or beta version.

Anyways, that's my 2 cents. I tried being a beta tester in the past and because I needed to  work on clients projects while testing, it didn't work out simply because I could only have one version of videoscribe installed on my computer.

I hope Sparkol changes it so we can install more than one version on our computer.

So this is completely possible and I have 13 versions of VideoScribe installed on my machine at the moment so when an issue is reported I can replicate the problem in the version the customer is using if required. When you install VideoScribe on Windows (believe you are a Windows user) it will overwrite the C:\Program Files (x86)\Sparkol\Sparkol VideoScribe folder.

With our Beta Program this would happen automatically as we would change the installer and therefore it would be something like C:\Program Files (x86)\Sparkol\Sparkol VideoScribeBeta and leave the old folder in place.

But with the live versions you can manually create the different folder structure so the old versions do not get overwritten. The first thing you would need to do is uninstall VideoScribe from your machine as you can not overwrite a version with an older version so need to start the process with the oldest version you would like installed.

Once the oldest one you need is installed (Downloads available from https://my.sparkol.com/versions) you can then create a new folder in C:\Program Files (x86). I have called mine Sparkol Old so it appears next to the master folder.

You then copy the C:\Program Files (x86)\Sparkol\Sparkol VideoScribe folder from the master Sparkol file to the new Sparkol Old folder and rename it to the version number. You can then upgrade the version on your machine to the next highest version you would like and repeat this process. This will then only upgrade the master folder and the Sparkol Old folder you have manually created will soon have all the versions in it and you can open the application file manually from those folders to access that version. 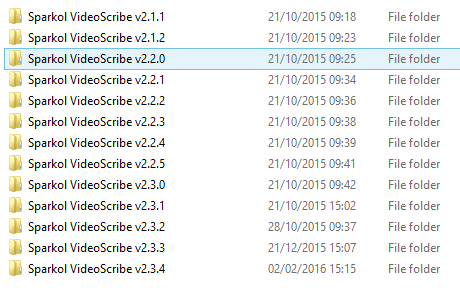 Not all the versions shown on my screen shots are now available but there is a good selection on https://my.sparkol.com/versions and we have kept most reliable version from each generation on there (barring v1 and v2.0 which are no longer in service)