I'm attempting to import SVG files from illustrator to video scribe. What I'm wanting to import is very simple line art. For instance I tried following this tutorial. When the person on the video exported to SVG then imported into video scribe they got the same thing, but I got a blob of mess as if all the lines were being seen as an object. Why is that? Here's what I see in illustrator: 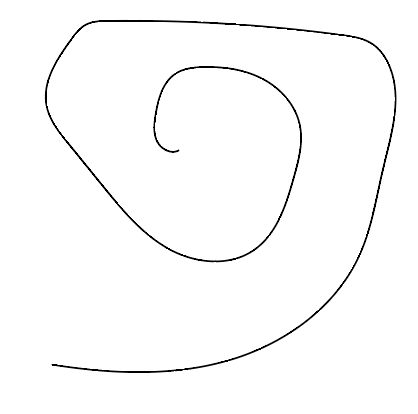 Here's what I see in video scribe: 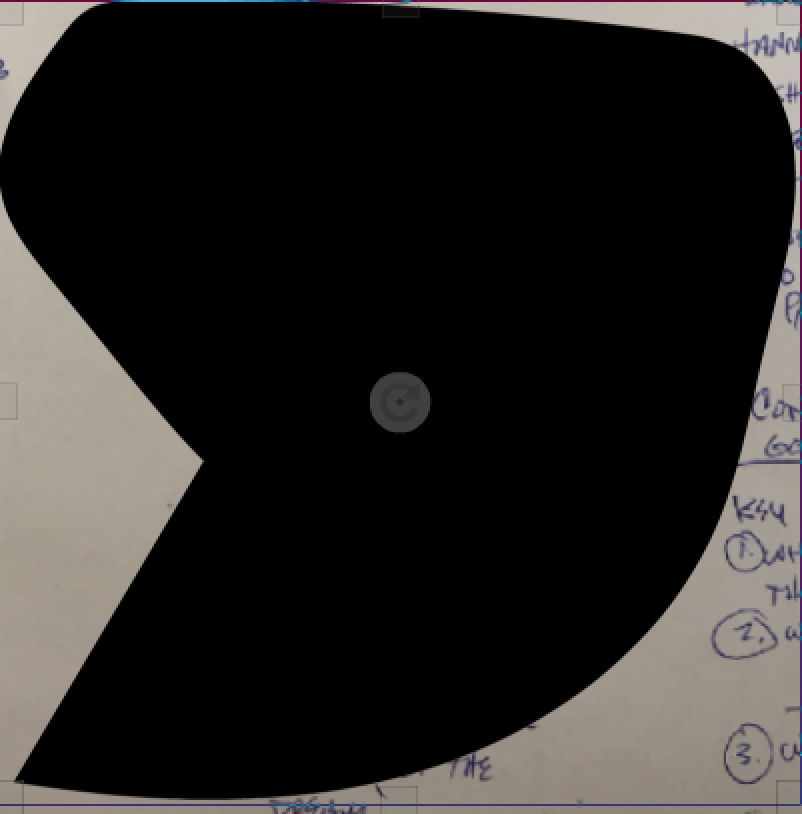 1 person has this question
M

On Mon, 12 Oct, 2015 at 3:47 AM
Hi,
Videoscribe  prefers simple stroked (and filled if you wish) paths drawn by hand with the pen or pencil tool.
if you use a spiral tool instead of a hand drawn path you may get undesired results.
if you use any special brushes instead of the regular pen or pencil tool, you may get unwanted results
if you use any layer masks, clipping masks or procedural styles or effects, you may get unwanted results.
Newer versions of AI (creative cloud) and inkscape include extra data that may also cause some problems.

I can't tell specifically what is wrong with your SVG without seeing the SVG file.

I've attached to this post the sag file. It's created with Illustrator CC and everything is hand drawn with a pen or pencil tool and it's very basic no special effects etc.

Looks to me you have the save settings wrong in Adobe Illustrator. When creating SVG images in Adobe Illustrator CC 2015 there is a save option that must be changed for the image to work in VideoScribe. When saving as an SVG there will be a save options box that will appear after you have given the image a name. You will have the option to change the CSS properties in the Advanced options section. The CSS properties should be set to either Presentation Attributes or Style Attributes. 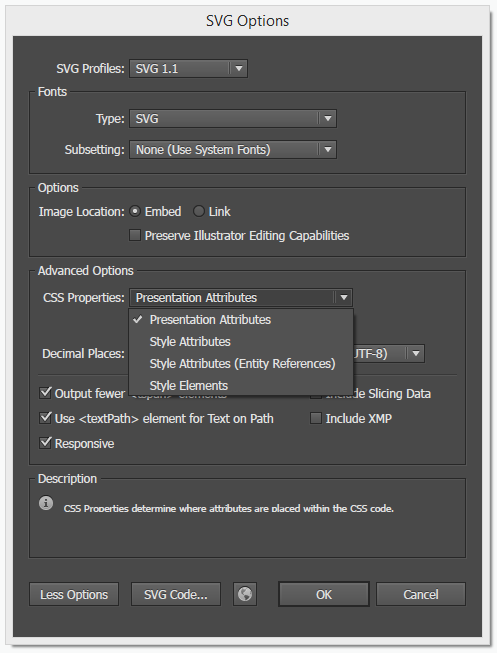 Thanks for your help. Your the first that mentioned that important setting, but I am wondering why one thing is not working as desired. I thought I had solved it by changing the decimal places from 1 to 3 but it started causing problems again. When the hand draws the line for any imported line graphics it does a thin line then when finished drawing the line it pops into a thick line. Once, after I made the change you suggested, it drew the proper thickness from the start to the finish of the drawn line, but now its reverted to a thin line till its finished then pops into a thick line. What setting do I need to change now?

Yeah some images with thicker line strokes can have that issue and there is not a huge amount you can do in to counteract it. You can lessen the effect by the default image quality up to 1200px but that'll cause crashes on bigger scribes because of the size of the image file. So it's usually best to save a couple of copies of the image at the standard and then higher quality and then pick and choose depending on the size of the scribe you are creating. Sorry it's not a perfect answer!

Could you tell me why it is that lines drawing in the video scribe library draw out at the same thickness but imported line drawings don't? Instead they behave in the way I described before (3 days ago). What program was used to create the line drawings in the library and what settings were used for export?

On Fri, 16 Oct, 2015 at 1:11 AM
Hi,
Regarding the symptom you described at the start of this thread, it's the same symptom from your previous thread.

If you use the save setting that Matthew provided:
http://help.videoscribe.co/support/discussions/topics/1000060941


(regarding the thickening lines, we might have to see the video to determine if you and Barry are discussing the same issue or issues that just sound similar when described.)

Your not reading my message properly. I'm not getting a filled black spiral. Again I'm getting thin black lines that become thicker after the hand is finished drawing them. Whereas the line art in the video scribe library starts out as thick and end at the same thickness. Since some understand pictures better than type here's a picture of an imported line in video scribe:

I understood your question about the thickening line. I provided two answers to two issues in my reply.

I first addressed your opening post, and the post in which you attached the spiral SVG, to clarify (for you or anyone else reading the thread) why you were getting the black fill in your spiral.  The reason your SVG file was filled black (as described in your opening post), was the same reason from your previous thread and the solution was the same solution from your previous thread.

Then I replied to your more recent post about the thickening lines and I said that it would help to see a video of the problem to determine if it was the same issue Barry was describing.

Thank you for providing the screenshots. As I suspected, it does not appear to be the same issue that Barry is describing (he is describing a more subtle thickening that sometimes occurs, when the finished SVG drawing is converted to a raster image by videoscribe) although the written description of the problem seems similar (your symptom is much more extreme and involves the stroke becoming about 10-20 times thicker after it is drawn). Your symptom could be caused by  variety of problems with the way your SVG is made or saved. Please attach the SVG if you would like feedback on the SVG.

This is very strange, but I just tried making another line graphic with illustrator and importing it to video scribe as a SVG, but I didn't get the same effect I've gotten so many times before. It drew the line at its original width/thickness. Another thing that's now changed is when I copy and paste text or other elements in video scribe it now pastes whereas before it didn't paste. Even after shutting the program down and restarting. I did a whole project without the copy and paste feature but now it's working and man it's nice. Well thanks all for the help. Looks like its all working for now.

I did some testing in your other thread:
http://help.videoscribe.co/support/discussions/topics/1000067878
and determined that certain problematic SVGs will "break" functions like copy and paste, delete, thumbnail selection and various other functions (possibly only things that involve keyboard input. I'm not sure).

Restarting Videoscribe resolves the problem as long as you don't import another bad SVG.

Good to know. Thanks Mike.